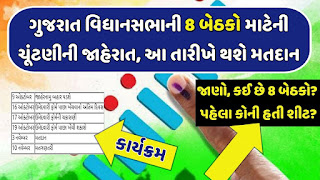 Where will the count be in how many rounds?

Voting for the by-election (By Election 2020) was held on November 3 in eight assembly seats in Gujarat on Tuesday. For the first time in the Coronavirus, voting was held with this mask and social distance. The fate of a total of 81 candidates, including BJP-Congress in eight seats, has been sealed in the EVM. Along with the results of the Bihar Assembly elections, i.e. on November 10, the results of the Gujarat by-elections will also come on Tuesday.

By-elections were held on November 3 in eight seats::

By-elections were held on November 3 in eight assembly constituencies in Abadsa, Morbi, Dhari, Gadha, Limmadi, Karjan, Kaprada and Dang. All these meetings were aggressively campaigned by the BJP. All the meetings were held by the team of state president CR Patil and the network of local organizations was strengthened. Tomorrow, October 10, is the first stage of Patil’s examination.

Possibility of slight delay in counting of votes: Officer

State Chief Electoral Officer S. Muralikrishna said there is a norm of 1,500 voters at a single polling station at a time. This time the ratio has been increased to 1 thousand voters due to the Kovid guideline. So the number of EVMs has also increased and the tables and rounds have been arranged accordingly. Which is likely to cause a slight delay in the counting of votes.

Votes will be counted by a total of 320 employees

EVM machines have been set up by the Election Commission in the Strong Room above 8 counting centers amidst three layer security system. The counting of votes will begin at 8 p.m. Counting will be done on 97 tables in 25 compartments above 8 centers. Votes will be counted by a total of 320 employees. The first postal ballot will be counted which will last about half an hour. The EVM will then be counted and then the random count of the VVpet slips will be done. Candidates entering the counting center, their agents, staff and all will be temperature checked by thermal gun.