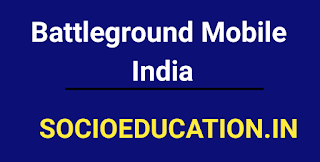 The rebranded version of PUBG for India is called BGMI that stands for Battlegrounds Mobile India. Pre-registration for the BGMI was started last month and now early access to download Battleground Mobile India APK is released. Those who want to download BGMI App will have to follow through various steps and details for the same are given on this page.

The New version is now available on Google Play Store and it is only 721 MB in size. As this is just the installation file, after installing this, users will have to download the resource pack from the game itself. It is also wonderful news that the players can import their items and old progress from the older version.

Battlegrounds Mobile India is an action-adventure game developed by Krafton. Free to download and play, this game transports you to an island full of players trying to survive. Here, you will play against other online players to become the last man standing.

Battlegrounds Mobile India is the revamped version of PlayerUnknown’s Battlegrounds (PUBG) Mobile for Indian audiences. With this, expect to see a lot of similarities. In fact, almost everything offered in the game is a carbon copy of the popular battle royale title. Although, you can still see a few minor quality of life (Qol) changes here and there.

Is the game different from PUBG?

PUBG Mobile is one of the most popular apps in India, especially among game enthusiasts. However, when the government put a ban on several Chinese applications in the country, it was one of the games that got axed. To date, players are no longer able to access the action title. Although, after several months, the game’s successor arrived in the form of its new avatar known as Battlegrounds Mobile India.

The game comes with almost identical gameplay that immerses players in countless events and tournaments. You also get to battle it out against other players across the globe. Typical of a battle royale, the game will transport you into a shrinking island where all players are trying to survive by killing one another. Armed with weapons, you will explore this island and kill all the enemies you spot.

However, while it is fairly identical to PUBG, Battlegrounds Mobile India brings some QoL improvement that sets it apart from its doomed antecedent. It reclassified Kills as Finishes and allows players to change the color of blood to make it look less violent. Additionally, it lets you change the server with ease. The game also avoids health repercussions by prompting players to be wary of their environment as they play.

Is the game good?

Overall, Battlegrounds Mobile India is a game that allows Indian fans to experience, once again, the exhilarating battles that PUBG Mobile offered. Here, you will find almost everything familiar, from gameplay and graphics to maps and weapons. However, that is not to say that the games are identical. There are a few management and cosmetic changes that set it apart from the banned game. Although, the experience will be similar.